Five hundred meters east of my house stands one of Melbourne's most well known icons: 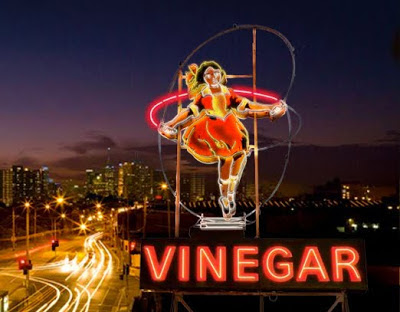 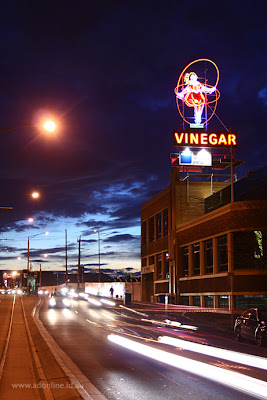 The Skipping Girl Vinegar sign, also known as Little Audrey, is popular enough that it has found its way onto souvenirs, artwork, clothing and was even taken by a local band for their name: 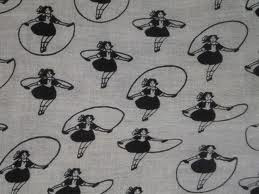 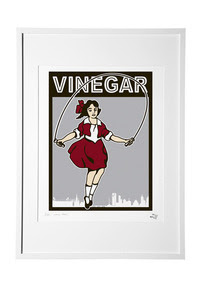 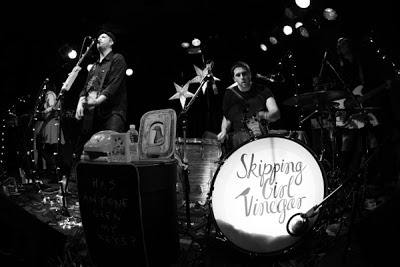 While Little Audrey has become a well known and well loved part of contemporary Melbourne, the sign has a story that stretches back to 1936 and features many ups and downs. Audrey was not always held in the same high regard as she is now.

Today the sign stands atop a smart looking brick building on Victoria Street in Abbotsford, which is used for professional offices and high end flats. This is in keeping with the area itself, which has become a fashionable place to live and work.

But this wasn't always the case. The Abbotsford of 1936 was a gruff  industrial district, home to factories, warehouses and small worker's cottages. One of the many manufacturers based in the area at this time was the Nycander Company, who produced a locally made malt vinegar called 'Skipping Girl Vinegar.' 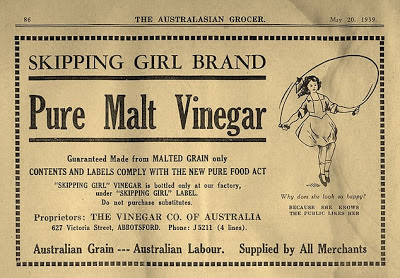 The 'Skipping Girl' brand first appeared around the turn of the 20th century and quickly became popular. It is thought Nycander chose the name based on a children's skipping rhyme, popular at the time. One variant of the rhyme ran:

Salt, vinegar, mustard, pepper, If I dare, I can do better...

Which suggested a fun little connection between vinegar and skipping that the company could employ to its advantage. The origin of the logo itself is something of a mystery.

According to the National Trust, Nycander held a competition in the 1910's asking people to submit a design for a new logo for the vinegar. The winner was either a sketch of a local schoolgirl named Alma Burns, or another local school girl whose identity was kept secret because...

In any case, a skipping cartoon girl was adopted to represent the vinegar. In 1936 Nycander moved their operation to a factory at 627 Victoria Street, Abbotsford. The company was doing well enough that they wanted an ostentatious symbol to promote their signature product.

A pioneering local advertising firm, Neon Signs, designed and produced a large scale neon sign for the roof of the factory based on the vinegar brand's logo. Neon Signs were so proud of their creation that they did not want to sell the sign and so Nycander had to rent it form them, paying 8 pound a month for the privilege.

Looking at the image above, you can see that the sign does not match the logo for the vinegar shown on the side of the building. The story goes that the Nycander manager responsible for the sign based his design not on the vinegar bottle, but on the daughter of the man who ran his local milk bar, where he bought his cigarettes.

The Skipping Girl sign was Australia's first animated neon sign and one of the first in the world. Its novelty caused it to became quite a local attraction, with people from across Melbourne coming to Abbotsford to see it. And it was more widely visible across the city at that time than it is currently, as the city skyline was kept low by a Melbourne City Council height restriction.

Many children of the time period can recall either visiting the sign, or seeing it across town, distinctly.

It wasn't long before the Skipping Girl sign was dubbed Little Audrey. Little Audrey was a common phrase in Australia at the time, a curious little piece of folk slang lingo. Little Audrey stories were a popular piece of light entertainment, swapped between people like jokes.

In the stories, Little Audrey would normally be wide eyed and naive and would have some humourous interaction with someone older or more discerning. Audrey would ofetn say or do something daft, which provided the punchline. Competitions were held, asking people to submit their favorite Little Audrey Stories.

An example from a Brisbane newspaper in 1936 (The Queenslander, July 2): 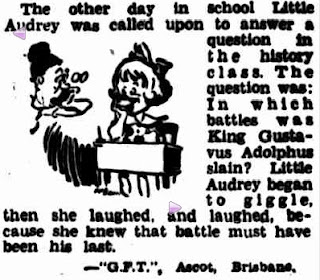 It was a natural step then, for people coming from across to Melbourne to view the skipping sign, to start referring to the girl depicted as a Little Audrey.

In the 1960's Nycander decided to move their operations to Altona and put their factory up for sale. In 1968 it was bought by the Metropolitan Fire Brigade, who intended to use the location as a training ground.

The old factory was demolished and although the company had intended to transfer their famous sign to their new location, they were told by the Shire Council that that this was not permitted. The council considered the sign a distraction and, therefore, a traffic hazzard, a piece of nanny state wowserism that would fit nicely into the present day.


As Nycander had effectively been forced to relinquish Little Audrey, there was some debate as to who could then claim ownership. Neon Sign's, citing the original lease of the sign from them, returned to claim it but demolition firm Whelan's contract stipulated they had rights to salvage the old factory. They quickly sold Audrey to a local used car dealer, CE Hayward Pty Ltd, for $100, after which she disappeared from view.

And there the matter appeared to have rested.

But in 1968, serious signs of dissent regarding the loss of Melbourne's cultural history were stirring. Protests over the demolition of historic buildings had begun and, while these were fledgling, pointed the way to the future. A new generation of Melbournians was not prepared to see their city changed and redeveloped without a fight.

And so The Skipping Girl Vinegar sign, a popular and fondly remembered part of Melbourne's skyline for several decades, became the focus of a public outcry. The removal and private sale of the sign was much discussed in the press, and a local radio station ran a 'Save Audrey' campaign.

By this time, eighteen months or so after Audrey's removal, the original sign could not be located. So a new replacement was commissioned and paid for through fundraising. The new sign would be smaller and would feature a more contemporary Audrey; with longer, freer flowing hair and a shorter dress.

John Benjamin, Governing Director of Crusader Plate whose metalworking factory was just 200m from where the old vinegar factory had stood, offered the roof of his building for Audrey Mark 2.

On the auspicious date of Friday, November 13 1970, the new sign was re-lit. Barry Humphries would later tell The Age newspaper that he had located the original Audrey behind the used car dealership in Richmond in May 1974. Rusted and beyond repair, he laid a wreath and composed a song in Audrey's honour.

But that's not quite the end of the story.

The new Audrey had nearly twenty years of active nights, before the building she now sat on changed hands again and imperiled her fate. The metal plate works closed in the late 80s and Audrey went dark again. The building was sold and refurbished, reemerging in 1989 in its current, swanked up form. To celebrate the re-dedication of the building, now dubbed Skipping Girl Place, the new owners paid for Audrey to light up again.

Audrey 2 stayed alight this time until 2001, when the building's new owners stopped her electricity supply as a cost cutting measure. Even her listing as a Heritage Item in 2007, saving her from removal or destruction, was not sufficient incentive to get the owners to start her up again.

She stayed dark this time around until 2009, when various Government agencies chipped in money to restore her, and energy company AGL offered to supply her power needs in exchange for some good publicity. A small solar system on the building's roof supplies enough juice to light Audrey up each night.


She has remained alight and alive since, skipping gently away as she overlooks one of Melbourne's busiest streets, a scene very different to the one her predecessor would have witnessed. The fact that she is now powered by a thoroughly 21st century style of renewable energy provides what seems a fitting end to the story. An end that is... until her building changes hands again.
Posted by Danno at 3:26 PM

Email ThisBlogThis!Share to TwitterShare to FacebookShare to Pinterest
Labels: advertising 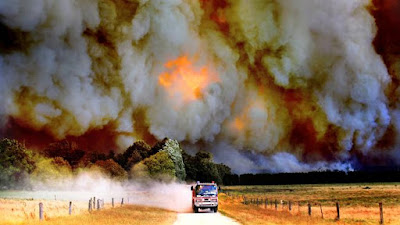